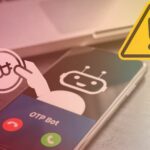 This story was told by CNBC journalists. Anders Apgar, an obstetrician from the USA, was having dinner with his family, when suddenly his phone in the next room began to ring incessantly. The number seemed strange, so the man did not pick up the phone.

But the calls didn’t stop, then Apgar’s wife’s phone started ringing. She received a notification “

Your account is in danger“. After that, the alarmed woman picked up the phone. A bot answered on the other end of the wire. He introduced himself as a security officer at Coinbase, the largest US crypto exchange. Further, the story is predictable: the spouses were informed that someone tried to log into the account on Coinbase, “

if it’s not you, press 1“. Apgar’s wife pressed 1. As a result, all the money disappeared from her Coinbase account – and this is $ 106 thousand in cryptocurrency.

OTP-bots as a paradise for hackers

Previously, scammers had to call in person to swindle the victim’s account password. Now there are OTP bots that do everything themselves. They allow you to bypass two-factor authentication. Such programs have become affordable and inexpensive.

So, the Telegram bot “BloodOTPbot” are sold on the dark web for only $169 dollars per month. The scammer only has to spend a couple of dollars more on phishing programs for Instagram, Facebook or Twitter, and the scheme is ready.

OTP bots are especially dangerous because the user of the crypto wallet receives an automatic call and supposedly official notifications. Therefore, it is difficult for a person to orient himself and suspect that something was wrong.

Important! On the channel, we shot a detailed video on how to protect yourself from different types of scammers in the crypto industry. Be sure to watch it and stay safe: