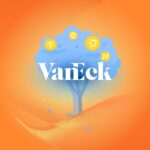 The head of the company VanEck, managing cryptocurrency assets, believes that stablecoins need simplified regulation. They should be considered as investment products, not banks.

According to Jan van Eyck, stablecoin issuers do not lend, do not provide other financial services. So why does the state seek to regulate this area in the same way as banking. After all, if a company is regulated like a bank, this may imply some kind of state guarantee – responsibility for its activities.

In his opinion, with stablecoins you need to do this:

The head of VanEck timed his words to the recent speech of the US Deputy Secretary of the Treasury, who stated that stablecoins imply banking and investment products, and there is a gap in their regulation. year. It stated that issuers of stablecoins should operate under the same rules as banking institutions. She also added that only companies with a banking license can issue stablecoins.

Jan van Eyck’s opinion was supported by the head of Arca. He also believes that stablecoin issuers need to be regulated like investment funds. That is, according to the law of 1080 g. If you create a Blockchain Transfer Fund in the USA, you can activate the use of stablecoins by banks and other large institutions. This will benefit everyone.