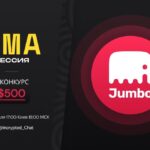 This is the text version of our AMA in chat with the Jumbo project – a DEX AMM protocol built on Near, including products such as Jets and Yield Finder.

After the news that Alameda brought to Jumbo, drew attention to this project.

Incrypted: Let’s start by presenting your project to the community. So Jumbo is…

Jumbo: Jumbo is a new DEX on NEAR that will make trading much easier for users.

Incrypted: Tell me more about Jets and Yield Finder. What problems do they solve?

Jumbo: The problem that many users face is that there are constantly many different farm programs and users must constantly keep abreast and independently monitor. Our functionality allows you to simplify this process. We want to add this in the next release.

Incrypted : Now would like to hear about Smart Pools. Why do you call your pools “smart”, how are they superior to the regular model?

Jumbo: The process of adding liquidity with us will be standard. Smart Pools is a mechanism that at the first stage will clearly demonstrate to the user where it is most profitable to stake tokens.

Incrypted: You position yourself as the friendliest UI/UX AMM built on the Near blockchain. Tell us what it is expressed in?

Jumbo: Well, we took a good base and tried to improve the user experience. We have tried to reduce the number of actions for the user to basic operations such as exchanges and adding liquidity. We also tried to display all the information for the user as clearly as possible.

Incrypted: In the current market, liquidity flows from one chain to another, what do you think about cross-chain exchanges and will there be any solutions related to this?

Jumbo: Of course, the current situation is most likely not the most optimal when liquidity flows through bridges. Cross-chain exchanges are still a rather complicated solution and not reliable. Therefore, we will focus on partnerships with bridges and the exchange of already wrapped assets. Which we will have in large quantities.

Incrypted: Are there any other benefits we not affected?

Jumbo: Well, it’s worth emphasizing that we are the first DEX with an AML solution. Thus, we want to protect our users from fraud. We use our partner HAPI protocol.

Incrypted : After studying your roadmap, many people were interested in the following points:

— You have planned a Retrodrop in the second quarter. Are the necessary conditions already known to become a member?

— Pools are also planned liquidity, with rewards in the form of NFTs. What exactly will these NFTs be? What value do they bring to the user?

As for the retrodrop, let’s leave it under a veil of secrecy. But mainly it will concern the use of the main functions of the platform.

As for the NFT, here we want to introduce the mechanics when the presence of NFT gives additional rewards.

I think we will be able to make an announcement when we add the main features to the platform.

Incrypted: Tell us more about KYT (Know Your Transaction), has this idea already been implemented somewhere or are you the first to come up with it? And what will happen to those transactions and addresses that will be suspected of money laundering?

Jumbo: Here we want to use DAO which will decide what level of security the pools will have and access to them. If the address that wants to add liquidity is suspected of money laundering, it simply won’t be able to add liquidity to the pool.

Incrypted: Sounds fair. But suspicion is not an accusation

Jumbo: Therefore, this decision is made by the DAO of the project

Incrypted: Tell us about your main competitors, and what are the key advantages of your project over them?

Jumbo: Well, that’s enough Simply, there is only one exchange on Near – Ref finance. As for the advantages, the most important thing here is that we will be able to achieve the smallest slippage when trading due to large pools. We will be able to create large pools of liquidity due to a large number of funds and 3 market makers

Incrypted: And of course, you can’t miss the question about investors, considering Alameda. Are there any other major backers or partners on the horizon?

Jumbo: Alameda is our strategic partner. But other funds also provide significant support to our project. This allows you to get exclusive listings at an early stage. And also have great media support. We will soon be able to announce another major partnership.

Incrypted: Native platform token, what use cases and benefits will it give users?

Staking , where a part of the trading commission for token holders will be distributed

AND Of course, this is for using the Smart pool function

Incrypted: When is IDO planned and on what platforms will it be?

Jumbo: The public sale has already been. So the token can be bought already from 15 February on our platform.