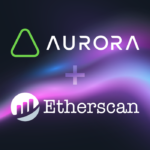 Aurora announces an important and long-awaited event: the most popular Etherscan explorer is integrated into the Aurora network and will be available to all its users and developers.

The version of Etherscan for the Aurora network is called Aurorascan and has the extensive feature set and proven reliability of Etherscan. With Aurorascan, users and developers will have access to development tools and network statistics, which will provide a broader understanding of the Aurora EVM. While this is a beta version, additional functionality will be added soon.

Aurora believes that solutions for further expanding the Ethereum ecosystem should be as simple as possible so that the transition of projects is smooth and painless. For the same reason, Aurora uses ETH as its base token to pay on-chain transaction fees. However, compatibility at the protocol/program interface level is not everything. It is also very important to have similar infrastructure applications for the comfortable work of users and developers.

Etherscan is the most famous explorer for Ethereum. It provides general statistics, data on the movement and listing of tokens, information on verification of the source code of smart contracts, and also has the function of reading and writing directly from the user interface. Users will be able to view transactions and individual blocks of the network. Developers will have access to a wide range of smart contract execution charts and statistics, comparative data, certain transfers between tokens, and a list of ERC- tokens on the network Aurora.

Aurora is an Ethereum scaling solution that allows you to run projects developed on Ethereum outside the main network in order to reach new markets and lower fees for users. One of the main priorities of Aurora is to provide a comfortable environment for users and developers. Aurora is implemented as a smart contract on top of the NEAR blockchain, so it has all the benefits of NEAR, including the ability to scale horizontally and increase the number of transactions thanks to sharding technology.

Etherscan is a leading blockchain explorer with search, API and analytics platform for Ethereum. Launched in 22 year, it is one of the earliest and longest running independent projects built on top of Ethereum and provides equal access to blockchain data for all users.