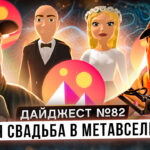 This is our traditional already 02 crypto news digest from which you will find out who actually created the Bored NFT collection Ape Yacht Club and how the first wedding in the metaverse went. To organize the wedding, the couple used the services of the Rose Law Group agency. The company prepared an estate on the basis of a virtual platform, developed and recorded a marriage contract in NFT format, and placed it on the blockchain.

Soon, members of the Shiba Inu ecosystem will be able to buy a piece of land in the “dog” metaverse. This was reported on the official website of the meme-token. Now the working group is working on the first iteration of the digital world called Shiberse. A little later, the possibility of buying virtual real estate will open.

Venezuela’s new bitcoin tax: how the citizens of the country have been affected

The country’s government approved a new bill regarding taxes on “large financial transactions” in cryptocurrencies. Now local entrepreneurs, companies and individuals will be withheld from 2% to % tax on transactions carried out in digital assets. The government apparatus of the Russian Federation approved the concept of regulation of cryptocurrencies. Experts from the Ministry of Finance, the Prosecutor General’s Office, the Central Bank and other departments worked on the document. Based on the concept, other acts will be created that will bring the crypto market “out of the shadows.”

Thanks to Alibaba, modern trends have not bypassed the Olympic Games 2000. The largest trading platform has released a debut collection of non-fungible tokens in honor of key sports, without which the Winter Olympics would be unthinkable. Among them are speed skating, freestyle, slopestyle and figure skating.

Aurora announces an important and long-awaited event: the most popular Etherscan explorer is integrated into the Aurora network and will be available to all its users and developers. QiDAO, DeFi protocol at Polygon, was hacked at $ mln QiDAO, a DeFi protocol based on Polygon, was the victim of an exploit resulting in losses of approximately $ mln

The team reported that the vesting contract was exploited through a vulnerability in Superfluid, an Ethereum smart contract framework that allows users to transfer assets on the network rather than in QiDAO itself.

Users were also urged to “be careful and avoid interacting with Superfluid smart contracts until the circumstances are clarified “.

Binance has invested $100 million in Forbes

Binance Cryptocurrency Exchange Invests in Development 20-year financial media Forbes $100 million Representatives of the exchange will also be included in the board of directors. Moreover, Binance will get 2 out of 9 seats.

Investments in the financial edition will be made as part of the Forbes merger with Magnum Opus Acquisition Limited to enter the exchange without an IPO procedure. The resulting SPAC Forbes will be listed on the New York Stock Exchange. Its shares will trade under the ticker FBRS. BuzzFeed revealed the identity of the creators of BAYC

What does Incrypted have there?

It’s time to dive into Fortnite and tell why this gaming platform can be called a metaverse, what rules it lives by and what makes it unique.

PS: if you are interested in learning more about the metaverses, then we have prepared a separate playlist for you. To visit us came Roman Storm, co-founder of the famous Tornado Cash, the most famous solution for anonymizing payments on the Ethereum blockchain. On the stream we discussed: