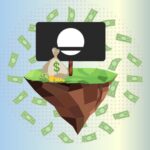 An investor in the lands of the Metaverse, Everyrealm, has raised $10 million in funding in Series A round. It was led by Andreessen Horowitz, Coinbase Ventures and Paris Hilton.

Before the rebranding, this company was called Republic Realm. She became famous for buying up land in the popular Metaverses – Sandbox, Somnium Space, Decentraland, etc. For example, in November, its representatives bought a plot in the Sandbox game for $4.3 million.

In total, the company has over 768 NFTs purchased in more than 10 projects. These sites can be monetized by building various buildings on them – museums, galleries, shopping centers. They can be rented or sold.

Everyrealm has a lot of activity in some areas. For example, the Fantasy Islands resort was built in Sandbox with a hundred holiday villas, as well as a yacht that was bought for 60 ETH. In the Somnium Space project, the company created the Realm Academy school, and in the Decentraland game, a virtual shopping center. also Hashed, NGC Ventures, The Sandbox project and parent company Animoca Brands.