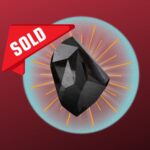 The Enigma carbonade diamond, whose composition indicates its possible extraterrestrial origin, was sold at Sotheby’s auction for cryptocurrency. An anonymous buyer paid $4.5 million in digital assets.

C on 29 of January 1920 of the year, the diamond was exhibited at Sotheby’s in Dubai, located in the international financial center. From 17 to 22 in January, visitors from Los Angeles could see it. On February 2, the diamond arrived in London. The auctions were held from 3 to 9 February 2022 of the year. Bets were accepted in BTC, ETH and USDT.

This precious the stone has an opaque dark surface, dotted with many holes. It is mined in two regions of our planet – Brazil and the Central African Republic. It contains a number of components of meteorite origin.

The description of the auction house says that this is a unique type of gem that appeared in places where meteorites massively fell, or of extraterrestrial origin – from the remains of diamondiferous asteroids that fell to earth from space after a supernova explosion.

A report by University of Florida professor Stephen Haggerty says that there is no scientific theory proving its terrestrial origin. Therefore, this is a truly unique diamond.

Sotheby’s did not release the name of the buyer, but a message from businessman Richard Hart appeared on Twitter that he is the owner of the diamond.

It is worth noting that this is not the first sale for the cryptocurrency of the lots of the auction house Sotheby’s. Digital assets are accepted during trading from October 2021 year. This payment option is also used by auction houses Lloyds Auctions and Christie’s. For example, the latter sold an NFT of digital artist Beeple for a record $69 million in ETH.