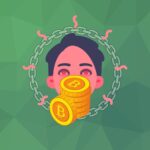 Twenty-year-old Liam Gershoni, who lives in Maryland, is charged with stealing bitcoins from his father. He slipped the psychoactive drug benzodiazepine into his tea to gain access to a BTC wallet worth $220 thousand

After his relative passed out, Liam got access to his account and transferred bitcoins to his wallet. He later changed 60% BTC to ETH. He left a note for his father with an apology and a promise to make up for the loss in the future.

The father, however, did not wake up immediately. The police were contacted by his girlfriend, who found him unconscious in the bedroom. It took him 4 days to recover from dehydration and dysfunction of internal organs.

According to him, his son’s lifestyle and drug use pushed him to such an act. Gershoni Jr. dabbled daily in cocaine and took benzodiazepines, often driving himself unconscious. At the same time, he reproached his father for being excessively attached to his cryptocurrency assets and asked him to get rid of them.

After the incident, the son admitted his guilt. He said he did crazy things while on drugs. And yet, when his father did not get in touch for a long time after taking a benzodiazepine, he called his father’s ex-girlfriend, who called the police. your relative. However, there is malicious intent and theft. He was placed in rehab. The family hopes this will bear fruit.