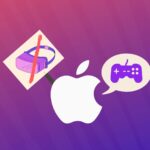 Last week, the media wrote that Apple plans to infiltrate the metaverse

In the past few days, there have been many rumors that Apple is allegedly planning release products for the metaverse. But it seems that the company is not going to follow in the footsteps of Facebook and Microsoft.

Mark Gurman, a well-known technology journalist, spoke about the reasons for this solutions.

Apple fights for every employee201184

A Bloomberg journalist reported that Apple has been struggling with the outflow of its best developers for several months . The reason for leaving is simple – professionals get better deals from VR companies, especially from Meta. According to the media agency, the company is trying to save itself by raising salaries and offering various bonuses.

Apple CEO Tim Cook also spoke about high costs recently. According to him, the company’s expenses are now disproportionate to its current activities.

By the way, Microsoft faced the same problem. Over the past few months they have lost more than 10 engineers. Employees “escaped” to Zuckenberg’s virtual projects.

201184Instead of metaverses, just games

Two days ago, Apple management denied rumors that the new headphones would have anything to do with the metaverse. According to the company, the headset will offer users “games, communication and an explosion of content.”