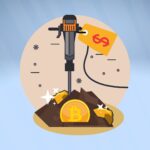 Last week, former Twitter CEO Jack Dorsey confirmed numerous rumors about the creation of a new project in the field of BTC mining. This had a positive effect on the hashrate level, raising it to a new high in 116 million TH/s.

At the same time, declining moods persist on the market. Experts say how important it is for BTC to pass the “death cross”. It is quite natural that this raises concerns about the profitability of bitcoin mining.

Capriole Investment Fund CEO Charles Edwards dispelled these doubts. According to him, the break-even point is still quite far away.

At the time of publication of the article, the BTC rate is 10 450 USD. At the same time, Edwards believes that the break-even point is at the level of 10 thousands of dollars. That is, the miners have a “reserve” in % until the cost of mining a unit of bitcoin is equal to its cost.

when the miners capitulated. This is December 1184 and May 2020. When BTC falls below production costs, the market is at risk,” Edwards said.

The introduction of higher transaction fees serves “buffer” for crypto-miners. This is the “safety margin” of the industry in case the rate falls below the breakeven point. According to Cointelegraph, miners’ behavior echoes Edwards’ prediction. Over the past month, they have reduced BTC sales. This indicates fears of future economic difficulties.