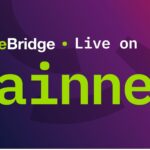 The deBridge cross-chain liquidity transfer protocol announced its mainnet launch a few months after the successful seed round and the release of Testnet 2.0. Starting with the Ethereum, Binance Smart Chain, Huobi Eco Chain, Arbitrum, and Polygon networks, the protocol’s public decentralized infrastructure allows users and protocols to send assets and data between any blockchain networks.

Any projects and protocols will be able to integrate with the decentralized deBridge infrastructure in order to implement arbitrary cross-chain scenarios, such as the exchange and transfer of tokens, cross -chain governance, farming strategy implementation, NFT asset transfer and interoperability, oracle data sharing, and more. deBridge makes blockchain interoperability more accessible and allows building new cross-chain applications and primitives.

In addition, the protocol allows users to send not only assets, but any arbitrary data and commands to be executed on the destination network. The security of the protocol has been a top priority for the team from the very beginning, which is why deBridge has received audits from security leaders such as Halborn, Zokyo, and Ackee Blockchain, and announced a reward program for the white hat community on the Immunefi platform.

“With the launch of the protocol on the mainnet networks, deBridge officially enters a new era of multi-chain compatibility, which will open up opportunities for the rapid development of technologies in the fields of DeFi, NFT and DAO, created on top of many blockchains and second-level solutions” . — Alexey Smirnov, co-founder and CEO of the project, commented on the launch of

In addition to the mainnet launch, deBridge announced an official partnership with decentralized exchange aggregators ParaSwap and 1Inch to work together to build an efficient cross-chain asset exchange infrastructure. Cross-chain swaps will be one of the first applications built on top of the deBridge infrastructure that uses the protocol’s ability to transfer liquidity and instructions between different blockchains within a single transaction.

deBridge allows any existing protocol or application to scale on any L1/L2 blockchain or sidechain and be able to be represented in different ecosystems, which solves the problem of liquidity and technology fragmentation. For example, Solana users will be able to interact with protocols on Polygon directly from their Phantom wallet without having to switch between networks or wallets.

In September 2021 deBridge announced the successful completion of its $5.5 million seed round. The round was led by venture fund ParaFi Capital. Also participating in the round were Animoca Brands, Huobi Ventures, Lemniscap, Crypto.com Capital, MGNR, IOSG, and bitScale. More information is available at debridge.finance.