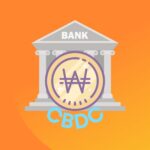 The project has successfully passed the first phase, the second phase is next

At this stage, experts will test the practical application of CBDC

On Monday, the Central Bank of South Korea released a CBDC modeling report. At the end of December last year, the regulator successfully completed the first phase of testing, after which it began to analyze other functions.

In particular, the expert group assessed the possibilities for the issuance and circulation of digital currency. The second phase involves testing practical functions, including cross-border payments.

“We plan to test some features, in particular offline -payments. We are also working on the introduction of technology that will make it possible to make the protection of confidential data more reliable, ”the representative of the Central Bank said in a statement.

The regulator is waiting for the next stage to be completed by the end of June this year. The task of the expert group is to confirm that the CBDC works just as effectively in real financial models.

If the second stage is also successful, the agency will involve financial institutions in the project to analyze the conditions for CBDC integration. This means that in a year the digital won can enter the market.

Over the past year, several countries have announced plans to issue a digital currency. Recently, the US Federal Reserve published a report that experts call the first step towards the development of a digital dollar.

China is already testing CBDC in practice. The digital yuan mobile wallet even topped the rankings in terms of downloads nationally.