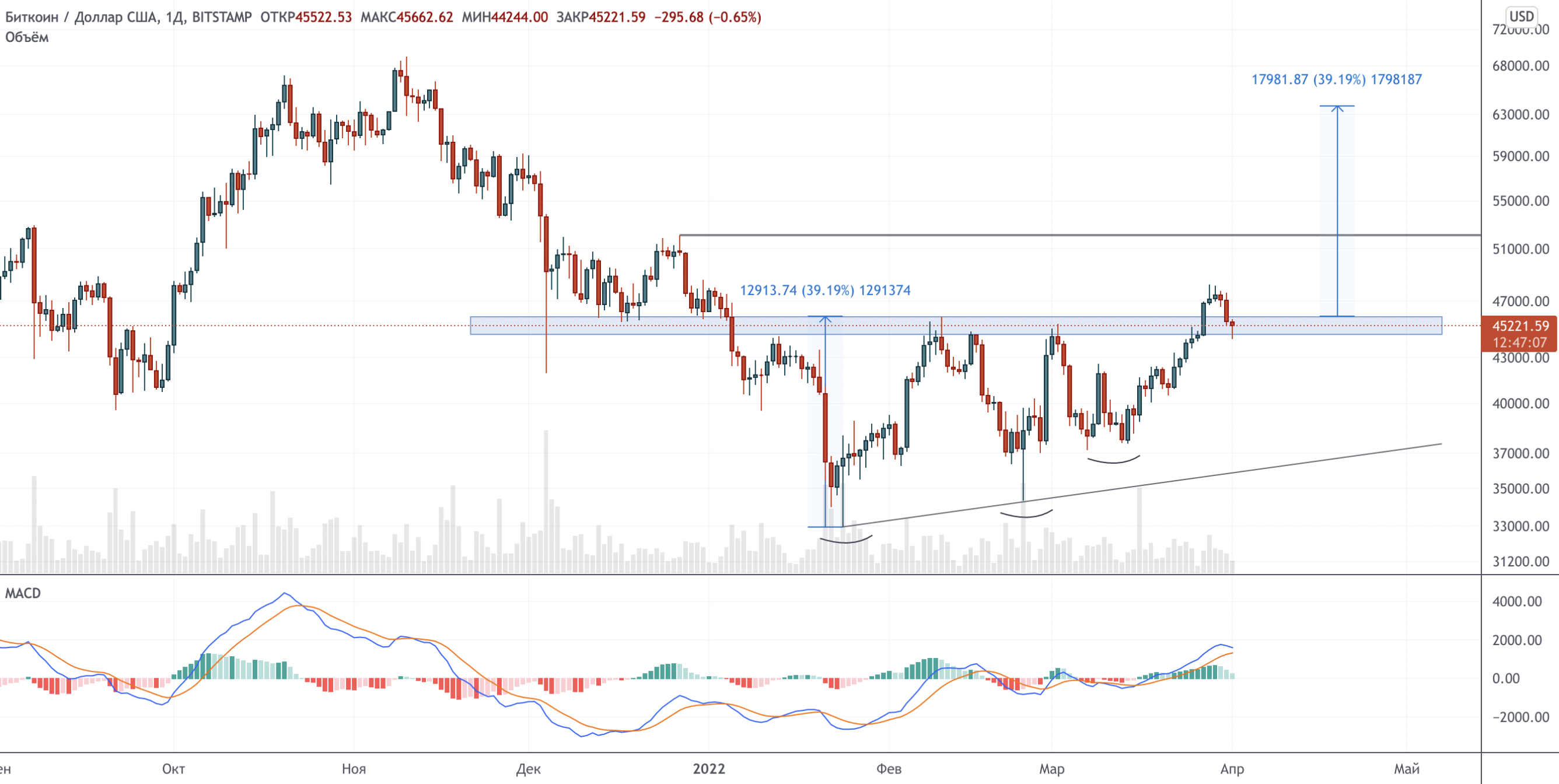 What you need to know about the BTC price chart here and now.

March has closed, it’s time to pay attention to the monthly chart. The last few candles here suggest that the bottom has probably been found and the market is ready for a reversal. The lower wicks of the last three candles show that the buyers were actively buying the decline on the higher timeframes and that the sellers were unable to push the price further down. The March candlestick looks very bullish in my opinion.

Price lost mid-channel support a few months ago, but looks poised to at least test it in the coming months, and the more it will take time, the higher this line will be.

At the moment, the picture on the monthly timeframe is encouraging.

Bitcoin’s weekly chart continues to show clear areas of interest. Now we are seeing a retest as a support -weekly moving average and key area ~$45 thousand. This was to be expected, now it would be nice to see a successful retest. Closing of the week promises to be interesting and, perhaps, defining for further direction.

The price returned to the key support and at the moment passed through it, however, quickly recovering. As I wrote more than once, when everyone is following a certain level, the market rarely fulfills it in exact accordance with expectations – the price either turns higher or goes through the level. Be that as it may, now we have a retest of an important level, from the result of which it will also be possible to build on our assessment of the short-term market prospects. The target level, determined by the depth of the confirmed ascending triangle, is indicated on the chart.

But, of course, patterns are only ideas, even if they can be considered confirmed. Technical analysis is an art, not a science.

Bitcoin has officially made a very fast transition from overbought (reached on the daily timeframe as well, for the first time in a long time) to the “oversold” zone.

Now that the market is “oversold”, I expect the price to either continue rising drop moderately further, forming a bullish divergence with the RSI, my favorite buy signal at an implied local bottom. This would require a higher low on the RSI and a smaller low on the price chart, the idea is reflected in the chart above. Dominance index

The technical analysis of the dominance index should not be taken too seriously, because the support and resistance levels are formed by traders’ orders, and this is not a traded asset.

However, the graph shows that something is happening very interesting.

Bitcoin dominance has declined significantly as the price of BTC has declined. This can be interpreted as a sign of the strength of the crypto market as a whole. Usually, when bitcoin falls, altcoins fall harder. Here, with a local weakening of the BTC rate, they showed better results in comparison with bitcoin.

In addition, the dominance index also decreased on the impulse of BTC growth. Usually, with a strong growth, you can see how, along with the price of bitcoin, its dominance in the crypto market also grows. In pairs with BTC, altcoins are sinking, and in pairs with USDT, they are marking time.

At the moment, altcoins look very confident and outperform Bitcoin in both directions. This is an infrequent situation, the development of which is worth following.