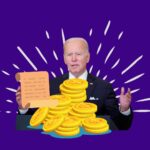 As early as next week, the Biden administration will issue an executive order that will oblige federal agencies to conduct a comprehensive assessment of cryptocurrencies and CBDCs. Based on this bill, a global government policy regarding digital assets will be formed.

Yahoo! Finance, citing data from a Bloomberg source in the White House. It is expected that the decree will be signed and published next week.

Primarily, the directive concerns CBDC. The presidential decree will instruct the Treasury, the State Department and the Office of Science and Technology Policy to study the mechanism for the introduction of digital currency and assess the risks in this sector.

Recall that earlier Bank of America predicted that the digital dollar would appear as early as 2025 year. It was also expected that the Senate would consider a comprehensive law on cryptocurrencies earlier this year. This decree may be the first step towards further development of the situation.

It is expected that the report of the department on the necessary measures for the implementation of the CBDC will be ready within 100 days. The structure will also analyze the degree of impact of digital currency integration on the environment. This will take much more time – 545 days.

The Financial Stability Board will undertake to study the implications that may arise from the integration of digital assets. And monetary institutions will look for tools to protect against the risks dictated by cryptocurrencies, including the high volatility of the latter.

The FBI will also partially oversee the industry. A new division is being formed on the basis of the department, which will deal exclusively with crimes related to digital assets. In January, the Fed released an extensive report in which the regulator analyzed the nature of stablecoins. Among other things, it indirectly confirms the intention of the department to carefully study the issue of issuing CBDC in the near future.