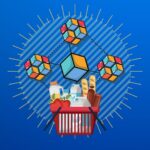 Renowned sportswear designer and philanthropist Sean Kurtz came up with a scheme to deal with the problem of hunger with the help of the blockchain. His concept is called food tokens.

Kurz’s FoodChain Global (FCG) will use the blockchain ecosystem to support charitable causes. Unlike traditional organizations, payments here will be accepted instantly from anywhere in the world. In addition, smart contracts will help track every spending, which means they will ensure honesty and transparency.

FoodChain Global is built on its own FOOD tokens and unique NFTs on the Polygon blockchain. Customers can also purchase physical items (clothing, etc.) to participate in the charity event.

The company will donate all profits to the Daily Bread Food Bank and Haven on Queensway. These are food banks that buy food for countries in need.

The person who made the donation will be able to track their funds on Polyscan. He will get 100% confidence that his money went to the intended purpose.

Blockchain in the service of mercy

In his interview, Sean Kurtz criticizes many modern blockchain projects for the fact that they do not have a mission, value for society and the planet as a whole. This is especially true for meme-tokens created for fun201080. The designer urges the crypto community to “take a break from trifles and show the good side of the blockchain.”