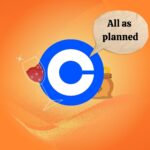 Companies from the crypto market are more and more willing to advertise at major sporting events. Now they competed against each other during the Super Bowl, an important event in the USA.

So, during a break on television, a video of the Crypto.com exchange was played. For their promo, they enlisted the legendary athlete LeBron James:

A stock exchange FTX has been giving away free bitcoins as part of its marketing campaign. Such an airdrop took place during the broadcast of commercials at the stadium.

But the Coinbase promotion made the real noise. Their advertising was quite innovative. It contained a QR code similar to the classic retro DVD intro. However, users and viewers reported that an error occurred.

According to Coinbase, the failure was due to the huge number of visitors.

Some users believe that the non-working the link is a publicity stunt to draw even more attention to Coinbase.

In addition, the commercial breaks during the Super Bowl are some of the most expensive on American television. Average cost 20-second video this year costs 6.5 million Advertised Coinbase mobile app climbed to #2 in the US AppStore. And one more news from the Super Bowl. Famous rapper Drake made 3 Bitcoin Super Bowl bets worth more than $1.5 million and all of his bets came out.