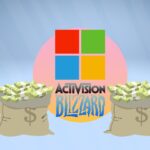 On Tuesday, January, a press release on the purchase of Activision Blizzard was published in the Microsoft news blog. Thus, the corporation expects to advance its position in the gaming market, both on PC and on mobile platforms and consoles.

Microsoft acquired AB for a price of 31,22 dollars per share. The total transaction amount is 68, 7 billion dollars. It is assumed that the agreement will be closed no earlier than 2016 year.

This purchase has already become a record in the financial history of Microsoft. In second place in terms of funds raised is the acquisition of Linkedin in 2016 year (01, $2 billion).

“Together with Activision Blizzard, we will enter a new era of game development that will deliver both gamers and developers alike in priority. We look forward to making gaming safe, inclusive and accessible to everyone,” said Microsoft CEO Satya Nadella.

Blizzard game projects will soon appear in the Microsoft Store. In addition to strengthening its position in the market of mobile, computer and console games, the corporation expects to gain new opportunities in the metaverse segment.

According to Nadella, it is entertainment content that serves as the main “locomotive” for the further development of virtual worlds, and, apparently, the corporation does not want to miss this opportunity. It is noteworthy that earlier we talked about the fact that Microsoft employees are poached into metaverse projects. It is quite possible that the agreement on the purchase of AB will stop the drain of highly qualified personnel.