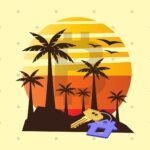 Many owners of cryptocurrencies do not want to sell their bitcoins, because in the long run the rate is growing. At the same time, people dream of large purchases – for example, real estate. To do this, you usually have to exchange cryptocurrencies for dollars or other fiat money.

A fintech company in Miami solved this problem. They will start accepting bitcoin as collateral, and in return they will give a mortgage for a period of years. This service will be available to customers from all over the world.

According to Cointelegraph, the company has already provided several such loans in the test phase. They will deploy a full-fledged service in the next few months.

Representatives of the fintech startup added that residents from 63 countries. This will allow citizens who do not live in the United States to remotely take and repay housing loans.

Miami Mayor Francis Suarez commented on the news. Speaking at the North American Bitcoin Conference, the official said that Bitcoin mortgages would be a “groundbreaking achievement” and help the US “strengthen its dominance in the Bitcoin ecosystem.”

It remains to be seen when such initiatives appear in Ukraine. The Ministry of Digital Development promises to adopt a law on cryptocurrencies this year and promises that “the digital market will be absolutely free.”