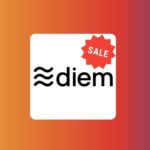 The company is considering selling any assets associated with its stablecoin

They expect to return the capital spent

Bloomberg sources reported that Zuckerberg’s team is in talks with investment bankers regarding the sale of the Diem crypto project. They are looking for the best way to sell intellectual assets and monetize the value they have invested in the project.

What will be the cost of Diem is not yet clear . And there is no guarantee that there will be a buyer for it at all. According to an insider, about a third of the project belongs to Meta. The rest is owned by other large companies, including Coinbase, Uber and Shopify.

Why does Meta take such a step? This is probably the result of the fact that from the very beginning Diem met with a wave of criticism from the authorities.

The idea was first officially announced in 1920 year. Then Diem was called Libra and was registered not in the USA, but in Switzerland. The owners included Facebook (today Meta) and many other companies.

But the news about the launch of the project caused a sharp reaction from the US government and regulators around the world. They stated that they were concerned about privacy issues and considered this an interference in the monetary sovereignty of states.

As a result, Mark Zuckerberg and ex-head of Libra David Markus were forced to testify before the US regulator SEC. In court, they argued that they did not plan to evade taxes, collect personal data without permission, or otherwise violate the law.