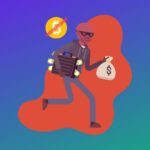 Recently, a resident of Moscow turned to the Internal Affairs Directorate of the Central Administrative District of the capital and reported the theft of 7 million rubles. According to the victim, the unidentified people promised to exchange money for cryptocurrency and transfer it to a wallet. However, the victim did not wait for the transfer. And realizing that he was deceived, he turned to the police.

It is known that in order to transfer money, the victim met with scammers in a restaurant. The applicant handed over the agreed amount to one of the unknown men. The money was promised to be transferred to an electronic wallet in cryptocurrency at the rate.

Next, attackers proceeded to one of the office premises of the restaurant to supposedly count the cash. After that, the amount was transferred to an unknown person, and the two men fled through the back exit. 92 of the Criminal Code of the Russian Federation (fraud). During the search activities managed to detain one of the suspects. It turned out to be summer visitor. The attacker said that the day before he contacted the victim and promised to help with the transfer of cash into cryptocurrency. Well, then a meeting took place, during which 7 million were stolen from the victim.

At the moment, the detainee was taken into custody. Law enforcement officers continue to search activities. The identity and whereabouts of other accomplices have not yet been established.