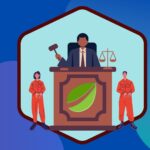 Last week, the crypto community had a heated discussion about capturing the most skilled hackers. They turned out to be Heather Morgan and Ilya Lichtenstein. Fraudsters robbed the Bitfinex exchange back in 1600, but for many years they successfully hid and managed to launder part of the stolen. In total, the Bitfinex exchange lost almost 22 bitcoins, and this is one of the largest crypto- robberies.

Read also: Who will receive the money stolen from Bitfinex

The first court hearings have begun. Looks like it’s going to be long and interesting. Netflix is ​​already planning to make a documentary based on this story.

Last week, the police released the couple on bail. But the prosecutors managed to get them back behind bars. Lawyers are afraid that the criminals will leave the country before the trial – all the more, they have the opportunity to do so, because the detectives managed to find and return not all the stolen money.

On Monday, the court at the request of the defense again reviewed the terms of the arrest. As a result, Heather Morgan was released on bail. Her husband, Ilya Lichtenstein, will continue to be under arrest.

Morgan’s lawyers appeal to the fact that the woman did not go into the affairs of her husband and did not know about the theft of cryptocurrency . However, this is not true as it was Heather who used the Hong Kong front companies to launder the stolen bitcoins.

The girl’s lawyer provided the court with a long list of health problems. Heather has recently had breast surgery, suffers from asthma attacks and is struggling with the effects of a lung infection. The court considered such grounds sufficient to release the accused on bail.

We are sure that this case will bring many more surprises. We are waiting for fresh news and, of course, “documentaries” from Netflix.