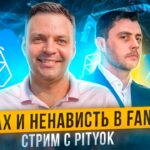 We had a guest from Bittrex and Block10 in Russia, the owner of the channel @cryptonitechannel and just a nice guy “from the community” – Pityok. By the way, he was already on our stream here.

We talked about the Fantom ecosystem, what were the updates, where it is most profitable to farm and what interesting things are happening. What happened between Cronje and Daniel, who is to blame, and what are the opinions of the community about this? We also talked about the metaverse, NFT, GameFi and other current crypto trends.

For those who do not have time to watch the entire stream, we have prepared a text extract.

What a scandal happened to Cronje and Daniel, and what is happening now?

A few weeks ago Andre Cronje reported that plans to launch a new Solidly project, whose governance tokens will be distributed only among the top 10 TVL projects on the Fantom network. After this announcement, the projects began to fight for places in the ranking. Soon an anonymous developer appeared who created the veDAO project. He said that his goal is to capture the bulk of TVL. After that, he offered a very high APY for providing liquidity, which allowed him to poach users and move up in the rankings to second place. Other developers didn’t like it. Representatives of the strongest projects united, launched their website, thanks to which they still managed to lower veDAO down in the rating.

After all these “wars”, Andre Cronje announced that he would launch Solidly with Daniel Sesta. Under the leadership of Daniel Sest, there are several projects, including Wonderland with the TIME token. One day, one of the users discovered that the financial director of the Wonderland project is also a co-founder of the Canadian exchange QuadrigaCX. The fact is that its CEO, in the 200 year, died during his stay in India, and as it turned out later that no one except him had access to funds. As a result, the exchange lost about $ 10 million. The fact of death was not supported by any documents and many assumed that the death was staged .

The user who discovered this emailed Daniel if he knew who the CFO of Wonderland was, to which he received a positive response. Soon, it became known that the financial director, as in the case of the Canadian exchange, is the only one who stores all the private keys of the project. After the outrage of the community, Sesta came to the defense of his subordinate, which the users and Cronje himself did not like very much. Andre proposed to arrange a vote using goverance tokens in order to solve the problem with the dismissal of the financial director.

After the results of the vote, and the dismissal of the financial director, Daniel announced that he wanted to stop the work of Wonderland. The vote to close the project was also held with the participation of TIME tokens, and although its results were in favor of the project not being closed, Sesta announced that the project would still be closed.

What is going on in the Fantom network now? Where can the brought liquidity go?

The activity of developers has not increased much I can’t say enough about the community. And as for liquidity, it’s not completely clear – there are snapshots, the list of winners is known (top-10 projects), but what will happen next is not known.

NFT we have been around for a long time, but unfortunately this market is not very active. They even created a fork of OpenSea, but nobody really trades on it. With GameFi, the situation is almost exactly the same, the projects are not very active, perhaps the time has simply not come. Unfortunately, I have not heard anything about the metaverses in the ecosystem, I am not familiar with them.

We have Andre Cranier who makes solidly. Also, most likely we will continue “wars”. DeFi, boroving, landing are also present.

Why wasn’t Fantom listed on Coinbase?

Everyone is waiting for this event, but for some reason nothing has happened yet happened. So we’re just waiting. I guess it’s a matter of time.

On Fantom as well as on others NFT networks are in trend. Among P2E there are also good games, but most of them are card games. Again, there is little activity, most likely due to the fact that Fantom is more suitable for DeFi and pharming.

What retrodrops can Fantom have?

Cases drops in Fantom are a little different than on other networks. Take Uniswap, 1inch, for example, they were giving away tokens from commissions they spent. In Fantom, the commissions are very small, so the drops are not particularly large.

What are good farms, and what is the APR?

The most important ones are SpookySwap , SpiritSwap. APR already depends on the chosen pair, approximately the same as on other networks, but a little more than in Ethereum.

Those who are interested in the topic can find something interesting for themselves in the chat and YouTube channel of the guest .