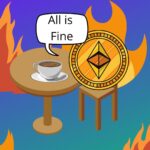 Since the launch of the London update, more than 1 750 ETH, which is equivalent to $5 billion at the current exchange rate.

On average, the Ethereum network burns 220 ETH every hour.

More about everything related to the Lond hard fork on on the Ethereum network, we discussed on our stream with Anton Bukov from 1inch.

The first management company in the cryptosphere was registered in Russia

Atomyze is a platform dedicated to the digitization of various assets using blockchain technology based on Hyperledger . According to the Bank of Russia, Atomyze customers will be able to issue digital tokenized assets or DFA, as well as exchange them for other tokens. It is an issuer of several exchange commodities based on Norilsk Nickel shares, which has listed them on 6 stock exchanges in Europe, including London and Frankfurt.

The history of the project originates in 1920 year, when Munib Ali in his dissertation described in detail the experience creating a decentralized project based on b blockchain.

While exploring non-financial use cases for blockchain technology, he created the Blockstack project, which allows users to own their data.

The Japan Virtual Currency Assets and Exchanges Association (JVCEA) proposed amendments to the bill regulating the listing of tokens and cryptocurrencies on crypto exchanges. If they are accepted, it will greatly simplify the verification procedure.

In fact, the updated law will abolish the lengthy procedure for checking and authorizing the currency. If it is listed on another internal exchange within six months, it can be added to the list immediately.

Recently, Michael Saylor, gave an interview to Bloomberg, in which he urged buy company shares. In his opinion, MSTR is more attractive for investors than other exchange instruments related to bitcoin.

Saylor said that MicroStrategy is a good investment solution with a positive return. The reason is that the company does not charge commissions for investment transactions, as funds traded in BTC futures do.

In the United States may cancel taxation small operations with cryptocurrency

Authors regulation propose to abolish income tax on cryptocurrency transactions, the profit from which is less than 24 dollars.

The bill was supported by four members of Congress, two each from the Republican and Democratic parties. The authors of the bill believe that the US Tax Code is obliged to “keep up” with modern trends in the world of finance.

Nintendo Expresses Interest in NFT and the Metaverse

The developer of gaming software Nintendo does not rule out the possibility of entering the metaverse and NFT market. But at the same time, the company says that they are aimed primarily at ordinary users and are not going to participate in the console race.

This statement was made as part of the discussion of the report on financial results for the third quarter of the fiscal year.

Nintendo does not want to rush into the development of this technology, analyzing how it can be useful for casual gamers.

US artist Nicholas Castello created 100-kilogram cube, to celebrate the launch of their cryptocurrency Castello Coin (CAST). Installation created from 000 – karat gold and exhibited in New -York’s Central Park for one day under the supervision of vigilant guards.

This is nothing but the physical embodiment of a digital asset.

The cube was cast by experts in Aarau, Switzerland. Gold content 999,9. According to experts, its cost is $ ,7 million At the same time, the company expects to overtake the DCJPY project, a virtual asset backed by deposited accounts.

It is expected that the stablecoin will enter the mass market by the end of February. The implementation will take place through retail licensed crypto exchanges, and the ZPG rate is pegged to gold quotes.

Like other analogues, this stablecoin will have a separate mobile client.

Over the past few months, Coinbase has been actively expanding its staff. In January, Taya Knight, ex-adviser to Elad Roisman, SEC commissioner, became part of the team. And in early February, Brian Rocha, a veteran of Netflix and Warner Bros., joined the ranks of the ecosystem specialists. entertainment. He will take the place of the head of the content department.

Rocha is a fairly well-known person in the media world. He has extensive experience in finance, business and content, as well as major media platforms. On his LinkedIn page, he said that he was happy to join the largest American cryptocurrency ecosystem. At the end of the year, Reality Labs (Meta) revenue was 2.02 billion dollars. The figure is not too big for a company of this level, CEO Mark Zuckerberg expects it to increase next year.

But this is by no means remarkable. The division that works on the metaverse and hardware for virtual platforms turned out to be unprofitable.

Also, the drop in quotes may be dictated by a small outflow of users from the platforms.

ExtendXYZ is a new NFT space on Solana, more details about which can be found on the project medium.

There are two ways to get NFT:
– Stakedrop:
201024To participate, you need to pass KYC and stake IDIA tokens on the Impossible Finance launchpad. Total will be distributed XYZ NFT You can read more about the conditions on the official page in the medium.