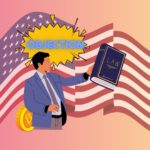 It has not yet been adopted, but has already caused panic among market participants

Today we wrote about the new bill “America COMPETES Act of 2022. He is launching a series of measures to maintain US economic dominance over China. One of the clauses of the bill gives the Minister of Finance the right to arbitrarily close crypto exchanges.

“This makes the American people powerless before the SEC”

What is the essence of arbitrariness

The Minister of Finance still has the right to close accounts suspected of money laundering. But first he must notify the public and give the company 120 days to correct comments. The ban cannot last longer than 20 days.

The proposed bill abolishes this procedure and gives the Minister the right to launch “special measures”. To do this, it is enough to accuse any exchange of “potential money laundering”. After that, the crypto-exchange is closed without public discussions and forever.

The current bill is just the plans of the authorities, and so far it is only on paper. In the future, it will go through several stages of discussions and approvals. Therefore, it is possible that some rules and articles will simply disappear (and the whole bill consists of 300 pages). On the other hand, given the political pressure, Congress may well take such steps. So we continue to follow the events and what impact they will have on the cryptocurrency industry.