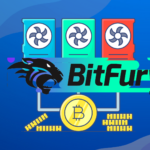 Crypto mining pioneer Bitfury Group is launching a new cryptocurrency mining data center in Ontario. It is assumed that by the end of this month the “farm” will reach capacity in 16 MW, and in May – up to 12 MW.

At the same time, the nominal expansion potential of the project is impressive 200 MW. The farm is based on Bitfury’s own hardware, but with the mediation of Hut 8.

“The demand for access to digital assets is now unprecedentedly high. The combination of Bitfury’s cutting-edge engineering and proven track record gives us a unique opportunity to become a trusted partner for clients around the world,” said Brian Brooks, CEO of Bitfury.

According to the press release, Bitfury sees North America as a promising a market for the development and implementation of new solutions in the field of crypto-mining. In the future, the company intends not only to gain a foothold in this market, but also to launch other projects.

Among other things, Bitfury has data centers not only in the US and Canada, but also in Scandinavia, Eastern Europe and Central Asia. The company was among the first to develop this field and still holds a leading position. For a long time, Canada has remained one of the most promising areas for the development of the crypto industry. However, recent protests, which led to the implementation of a nationwide blockade, have produced tougher legislative measures.