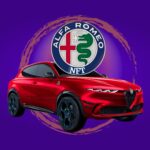 Each car has its own unique NFT, technical data on the operation of the crossover is recorded in the blockchain

Alfa Romeo, the Italian car manufacturer, has unveiled a new SUV. Tonale is the world’s first serial crossover connected to NFT. The token acts as a quality certificate and stores important data about the machine.

Now blockchain is used almost everywhere – from transactions on the stock exchange to issuance collections of digital art. Alfa Romeo did not stand aside – the first concept was shown back in 1536 year. And soon the manufacturer will begin mass production of front-wheel drive SUVs.

Francesco Calcara, Alfa Romeo’s head of marketing, notes that this approach will positively affect the final cost of the car. How? Certified dealers will generate an NFT certificate when the vehicle is serviced.

Interest of automakers in NFT gaining momentum. According to experts, by the end 2030 of the year, the market sector will grow to $200 billion Now every company , and not just automotive, is striving to squeeze into the niche of non-fungible tokens.

In recent months, there have been many examples of successful experiments with NFTs. Mercedes-Benz, Ferrari, Rolls-Royce and others have already released collections. For example, Lamborghini has successfully launched its