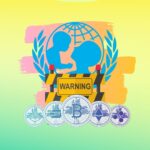 Among other things, the fund indicated an increase in the popularity of cryptocurrencies

Today, 20 January, United Nations Children’s Fund ( UNICEF) published a report titled “Prospects for Children in 2022”. Among other things, it contains a mention of cryptocurrencies. The organization calls for the development of protection measures for children against the backdrop of the global integration of digital assets.

The report states that unregulated crypto markets pose a threat to the younger generation. According to experts, children can become victims of economic fraud and exploitation.

UNICEF believes that the cryptocurrency market will continue to grow this year. This will make digital assets more accessible, but at the same time more dangerous for kids.

Taking into account all the factors, it can be assumed that by the end of this year, many countries will create their own legal framework to regulate this segment . And that is why UNICEF urges to think about guarantees for children in advance.

Among the risks are: labor exploitation, human trafficking, circulation of illegal content on the network, fraud and extortion. Activity in these areas of activity will grow against the background of the widespread availability of digital assets as an anonymous means of payment.

Consequently, normative programs for the protection of children on the Internet need to be revised, according to UNICEF. In particular, this concerns the literacy of teenagers in relation to cryptocurrencies and their position.

The forecast of the fund echoes the opinion of key stakeholders of cryptocurrencies. Rick Edelman, for example, estimates that by the end 1536 of the year, a third of Americans will own bitcoins. The President of El Salvador even announced that in the near future even more countries will legalize cryptocurrencies.