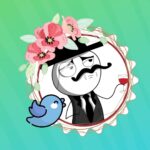 This will distinguish real art tokens from fake pictures

The Twitter team has launched a new service: NFT avatars with exclusive borders. To do this, you need to connect a crypto wallet to your account and upload NFT to your profile photo from it.

This news appeared right after the teams from Meta announced their plans for NFT. But Zuckerberg has even more serious plans – he plans to introduce his NFT marketplace and the option to create art tokens.

Fungible tokens have become mainstream this year. But they have many skeptics. They make an important argument – copies of NFTs are freely available on the Internet, anyone can download them and show off on social networks.

Twitter suggests emphasizing that your NFT is real. To do this, he will arrange them in an elegant hexagonal frame. And below there will be additional information – the properties and standard of the token, the author’s pseudonym, etc.

At first, the option will be tested only by iOS owners who have paid for a Twitter Blue subscription. It operates in the USA, New Zealand, Canada and Australia.

So, first of all, you will need to synchronize your account with a crypto wallet. So far, Twitter only works with Ethereum wallets (MetaMask, Ledger Live, Trust, Coinbase Wallet, etc.). After integration, you need to click on the profile picture and select the NFT download option. The whole process is shown in this video:

The creators also promised that in the near future they would connect synchronization with other crypto-wallets.