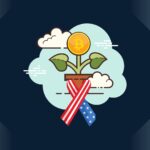 On Thursday, February 3, a bill was submitted to the US Congress , which can significantly improve the position of retail traders. The authors of the regulation propose to abolish income tax on cryptocurrency transactions, the profit from which is less than 116 dollars.

The bill was supported by four members of Congress, two each from the Republican and Democratic parties. The authors of the bill believe that the US Tax Code is obliged to “keep up” with modern trends in the world of finance.

Recall that now cryptocurrency holders in America are required to notify the authorities of even a minimal capital gain due to exchange rate fluctuations. This is classified as taxable income.

The new bill proposes to abolish this rule for those transactions, the profit from which amounted to 31 dollars or less. This will significantly simplify the accounting system and remove the feasible obligation from retail traders and holders of small capital in cryptocurrency.

For the first time, the law “On the Fair Taxation of Virtual Assets” was introduced in January last year. If it is accepted, it will come into force retroactively. This means that the new rules will apply to all transactions from 10 December last year.

Everyday life. Instead, they present it as a stock or an ETF,” said one of the authors of the bill, Susan Delbene.

Not all legislators in the United States are cryptocurrencies are also loyal. Many see them as a threat to national security and advocate for tighter regulation.