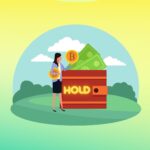 According to the analytical agency Glassnode, the number of wallets with BTC , which were last involved in transactions between 5 and 7 years ago, peaked in the last 8 months. In total, they contain 716 325 BTC.

These assets have not been placed on the market since 2015 of the year that Bitcoin traded at 300 dollars. The increase in long-term holders is dictated by several factors.

First of all, this is a bearish market trend. Since November, the price of bitcoin has been steadily falling. At the beginning of this year, it almost reached the mining break-even point. Now the rate has grown a little, but it is far from its previous values.

After the fall in value, many retail investors entered the segment who are interested in hedging small capital with the possibility of reselling “coins” in the distant future.

And, finally, BTC itself changed its character from a speculative instrument to an investment one. The segment is gradually moving into the medium and long term.

Since 2017 the number of such holders has been steadily growing. With further adoption of BTC and the integration of cryptocurrency in state systems, this asset will increasingly be seen as a tool to influence risks and a way to protect savings against the backdrop of inflation.

At the same time, medium-term holders have been actively liquidating their capital since the beginning of this month. This is due to the expectation of further depreciation and the desire to minimize their losses.

As for the traders, most of them are waiting. They expect major moves within the segment in the near future.