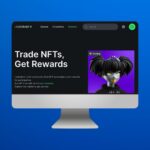 10 January New NFT marketplace LooksRare has launched. They actively undertook to conquer the market and on the first day of trading lured away many OpenSea users by promising them their own LOOKS tokens (87

Recently, LooksRare was marked by a new achievement – the trading volume on their platform exceeded $, 5 billion (for comparison, on OpenSea it amounted to $4.5 billion). At the same time, only thousand users vs. 220 thousand at OpenSea.

What is the basis for such an increase in trades?

The bottom line is, that users “wind up” transactions in order to receive a drop (distribution of tokens) from the platform. LooksRare gives tokens as a percentage of total sales, these drops are received by everyone who buys and sells NFTs. Users simply came up with a fictitious scheme – they sell NFT back and forth between their own wallets.

The results of the manipulations are well displayed on our infographic:

CryptoSlam analysts confirm this fact: 87% of transactions on LooksRare are fictitious. That is, it is a cheating of “fake” trading volumes. In their Twitter account, they published the data of the largest transactions:

The lion’s share of fictitious transactions refers to free collections, where the sellers did not pay a commission for the secondary sale. So, the Meetbits user “traded” $4.4 billion, Terraforms — $2.9 billion, and Loot — $624 million