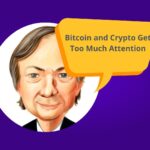 Ray Dalio, founder of Bridgewater Associates, thinks cryptocurrencies are getting a lot of attention

Soon some countries will ban MTC and cryptocurrencies

Despite the distrust of bitcoin, the billionaire’s investment portfolio contains digital assets

In a recent episode of The David Rubinstein Show, Ray Dalio revealed that cryptocurrencies are getting too much attention. The founder and manager of hedge fund Bridgewater Associates hinted that the capitalization of the most popular cryptocurrency (BTC) is quite large, even by modern standards.

Dalio said that in the near future, some countries will outlaw the digital currency. This statement has real grounds. Over the past year, China, Egypt, Turkey, Morocco and others have been added to the list of countries that have banned cryptocurrencies. Also, Dalio does not believe in tokens as a hedging tool.

Investors and other market players who are optimistic about tokens and BTC in particular are fueling the hype. This has led to the fact that the crypto market is now attracting more attention than ordinary investments.

Despite the distrust of cryptocurrencies, Dalio nevertheless replenished his diversified portfolio with tokens. As one of the richest people in the world, he considers digital assets “interesting.”

Dalio’s position is in many ways similar to the beliefs of bitcoin maximalists. He also worries about a bright political and economic future for the United States. And he believes that the Fed is delaying the issue of regulating monetary policy. But the founder of Bridgewater Associates believes cryptocurrencies are vulnerable to government action, and some of the conclusions or decisions of the Fed are erroneous.