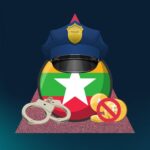 It prohibits residents from using remote servers and digital currencies

The government of Myanmar has decided to take a hard look at the proponents of cryptocurrencies and VPNs. Under the new laws, they face up to 3 years in prison or a fine of $2800. Also, the military government obliges communication companies to provide them with all personal data of users.

Burma is going through turbulent times. After the coup, a military junta seized power in the country. The former government is not going to give up and is looking for help from Western countries. Through VPNs and crypto wallets, they collect donations to fight the regime.

VPN helped ordinary citizens stay in touch with the rest of the world as the military government blocked all social networks.

At the end of last year, the government in exile issued a decree legalizing cryptocurrencies. They are supported by the largest stablecoin provider Tether. But in fact, such laws are not valid, since the real power is in the hands of the rebel fighters.

By the way, Western countries also reacted ambiguously to the cooperation of Tether and the fugitive authorities of Myanmar. The company is urged not to interfere in the internal affairs of states.

There are several countries in the world that have taken a tough stance towards cryptocurrencies. China was one of the first to do this – a complete ban on mining and trading was announced here. Russia also announced its plans last week. The Central Bank calls for a complete abandonment of cryptocurrencies and mining. The final decision will be made by the State Duma, and so far the timing of the consideration of this law is unknown.