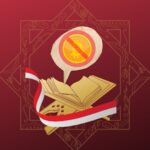 The highest clergy of Muhammadiyah Indonesia issued a ban on any use of cryptocurrencies. Now, for local Muslims, this is the same “haram” as, for example, pork.

The ban is called “fatwa”. In fact, this is a definite decision dictated by Muslim religious law, which is taken by the clergy.

This information on Tuesday, 18 January, published by the international edition of CNBC. The statement of the representatives of Muhammadiyah states the following:

“Tarji’s fatwa states that cryptocurrency is illegal both as an investment instrument and as a means of exchange or payment.”