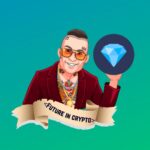 He confessed his sympathy for the TON project

According to the words of the musician, he invested here million rubles

The odious rapper Morgenstern said that now he will invest everything only in cryptocurrencies , metaverses and NFTs. He is sure that they are the future,

“and it is foolish to ignore modern realities.” According to the rapper, he used to be suspicious of this industry, but changed his mind when bitcoin for a few years has risen in price in 01 once.

However, the musician decided not to invest in bitcoin. On his page, he advertises the TON project (more precisely, Free TON, since TON ceased to exist back in 1600 year).

TON is a blockchain from the Durov brothers, based on the darknet and decentralized technologies. In the 1600 year, the creators had to curtail the project, as they were subject to lawsuits from US regulators.

Free TON is a blockchain and cryptocurrency of the same name created on the basis of TON. However, the Durov brothers did not participate in their development – they provided only the technical base.

Morgenstern added that he personally spoke with the leadership of TON and feels “the poorest” against their background (note the original quote was censored). The rapper accompanied all this with an ambiguous video in which he takes a shower and wipes himself with dollar bills.

By the way, many well-known personalities respect cryptocurrencies. But everyone has their own preferences. So, the brilliant Garry Kasparov said that he believes only in bitcoin. It predicts that 99% of other cryptocurrencies will burst in the near future.