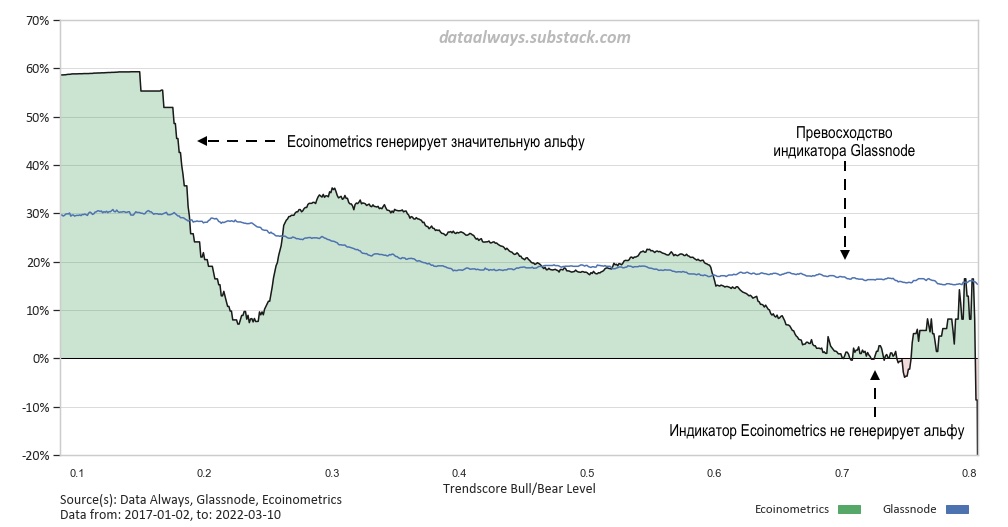 Let’s do an experiment: what is the actual predictive power of the accumulation trend indicators from Glassnode and Ecoinometrics, often mentioned in our posts? This is a post from Data Always, in which the author demonstrates a simple method for backtesting these accumulation metrics, describes the methodology for creating a trading strategy based on them, and analyzes the comparative profitability of an example of such a strategy compared to simply holding bitcoins.

Glassnode, one of the largest blockchain data providers, has introduced a new metric: the Accumulation Trend Indicator . The community reaction to it was mixed, and the chart below shows why: if we associate heavy accumulation with buying pressure, then it would seem that similar price reactions would be expected under similar accumulation patterns.

And the significant divergence between the areas labeled on the chart as “arbitrage with GBTC” and “hodler demand in a bear market” are red flags to look out for.

This Glassnode metric builds on the metric used by Nick at Ecoinometrics, but takes his analysis a little further. A datasheet is available on the Glassnode website, but I think most readers will be more interested in the usage comment:

Market sentiment is a good indicator for price movements. When market participants are bullish on average, they accumulate coins, increasing demand and, as a result, the price of an asset. When they are pessimistic, they sell off their coins, increasing the liquid supply in the market and therefore putting downward pressure on the price.

Nick’s description of his thesis in this post (not translated) Ecoinometrics is a “golden mean” between the basic thesis of Glassnode and the technical description of their metrics :

If everyone , from small investors to “whales” accumulating coins, this should have a positive effect on the price, as it reduces the liquid supply in the market, while at the same time indicating a high level of optimism of the participants.

Accumulation trends. “Participation Rate” is the share of the BTC supply representing groups of addresses that have accumulated coins in the previous days. Source: Ecoinometrics — On-chain participation

Moving from a pair of heatmaps to the plotted values ​​(below), one of the first things that catch your attention is the extent to which there is a discrepancy between the scores. Another important observation is that the Glassnode metric is calculated on a daily basis, while Ecoinometrics uses a thirty day period.

disclaim responsibility for any investment advice that may be contained in this article. All judgments expressed express exclusively the personal opinions of the author and the respondents. Any actions related to investments and trading in the crypto markets are associated with the risk of losing the invested funds. Based on the data provided, you make investment decisions carefully, responsibly and at your own peril and risk.