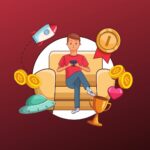 In January, Morning Consult published a report titled “The State of Consumer Banking & Payments”. It reveals the issues of adoption of innovations in the field of finance, as well as the factors influencing it.

Report authored by Charlotte Principato. She and her colleagues analyzed data 22 of thousands of Americans surveyed between July and December 2021 of the year.

According to the results of the study, it turned out that millennials are more inclined to accept and implement innovations than all other groups. At the same time, material wealth remains the main motivator for them.

During the specified period, the percentage of households among millennials that own cryptocurrencies increased from 20 before 48%. They are driven by the desire to improve their well-being to search for new financial opportunities.

Most respondents among millennials noted that their material wealth is below average. Decreasing wealth has been a global trend for the past seven months, Principato said.

If in the United States the average level of wealth among individuals was 50,98 points, then among millennials it was equal to 49,54 paragraph. This indicator Morning Consult derives based on various factors.

At the same time, according to the author of the study, the main reason for the decline in well-being remains the pandemic, to be more precise, the spread of the Omicron variant.

According to the results of the study, the company came to the conclusion that in 2022 the cryptocurrency market will experience a boom in demand. This echoes the findings of Rick Edelman. He claims that by the end of this year, a third of Americans will own cryptocurrencies. The reasons why young professionals massively choose salaries in cryptocurrency, we described in detail in a separate article. Note that the inflationary nature of fiat currencies remains the main factor, as a result of which people seek to protect their savings by converting them into hedge assets.