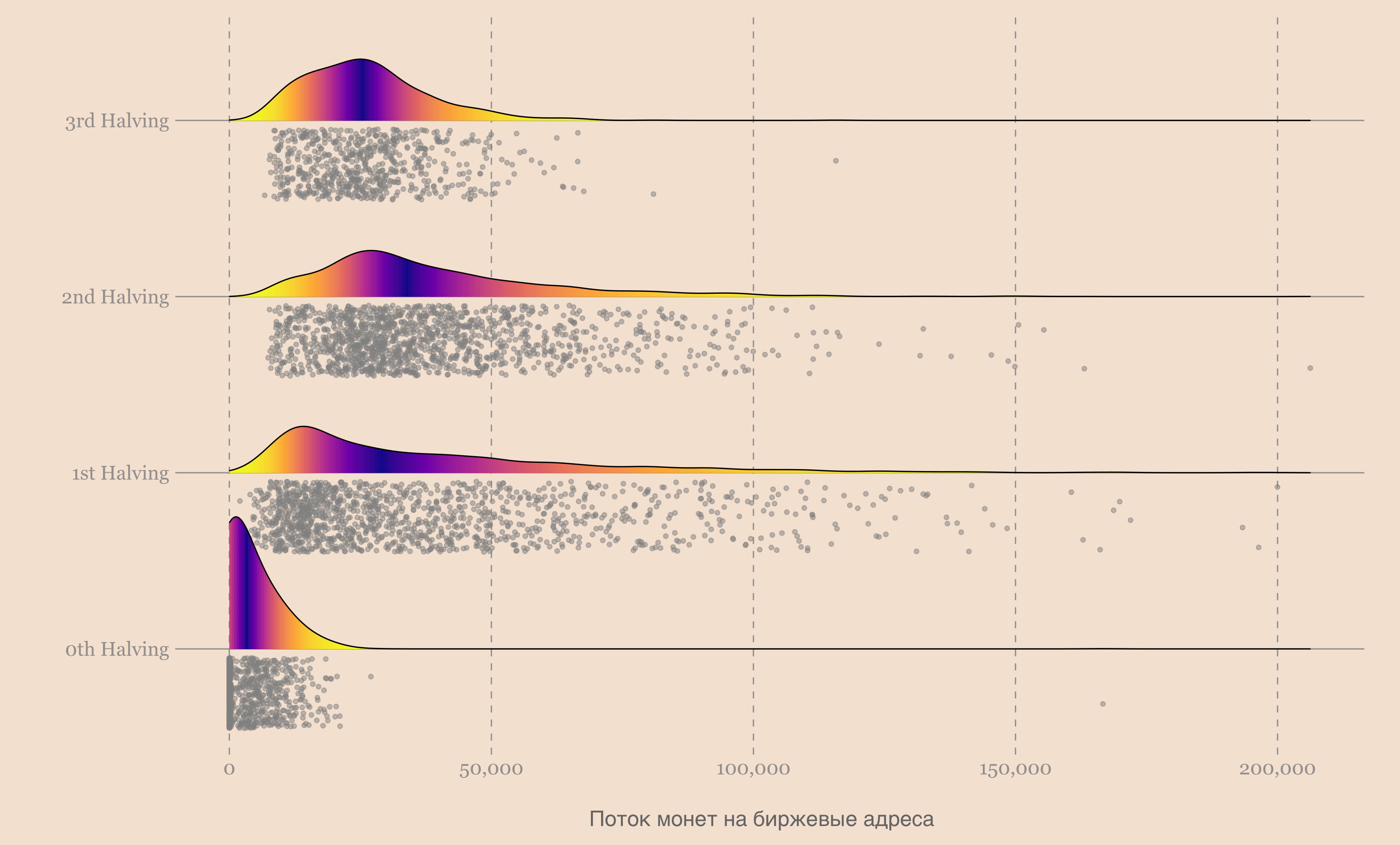 What kind of reaction do you expect from the price of bitcoin when you see a large number of coins moving to exchange addresses? Is disaster inevitable? Can you trade based on this information?

Currently I have a quest for deletion from the list of simple on-chain metrics.

A few weeks ago, we looked at the active supply of BTC and how little it says about further price dynamics. This week it is the turn of the inflow of funds to the exchanges.

What is the inflow of funds to the exchanges?

It’s simple, you can put together a list known exchange addresses. This is where exchanges store all the coins you send them.

I don’t collect this information myself, but companies like Glassnode and Coinmetrics do. For this analysis, I use the Coinmetrics dataset.

Then what I call inflow is the total number of coins moving to these addresses on any given day.

This metric should not be confused with net flow, which is the difference between inflow and outflow. Here we’re just looking at hodlers moving coins to exchanges.

The common sense hypothesis is that when you see a large influx of funds on any given day, it must be bad news. If a lot of coins move to the exchanges, then they are probably not just collecting dust there. People are going to sell!

So if that’s the case, we should be able to trade on that, right? Perhaps if we see a larger than usual inflow, we can expect some selling pressure. Maybe not on the same day, but definitely in the next few days after that, right?

Let’s analyze this in more detail. First, what kind of influx do we see on any given day?

Let’s plot the distribution of inflows by halving. Take a look.

Original the zero cycle is peculiar. Of course, this is due to the fact that there were fewer exchanges and the total supply was much lower. the tail of a very large one-day influx is getting shorter and shorter.

Perhaps it’s just that as bitcoin becomes more valuable, people don’t have to move as many coins to make the same profit in US dollars. Or it could be because there is less selling activity on the exchanges in general.

Probably a mix of both. The dominance of bitcoin is not what it used to be, and much of the activity on the exchanges revolves around ethereum and the altcoin market.

It is important to keep this magnitude in mind when analyzing historical data. Previously, large inflows amounted to over 100 thousand coins in a day. Then over thousand coins. Now it’s most likely around thousand coins moving in one day.

So, let’s return to the consideration of our thesis. How does the influx of funds to exchanges correlate with the return of BTC for the same day?

On the horizontal axis, we will display the inflow. On the vertical, bitcoin’s return on the same day the inflow was recorded. tributaries.

Is this really so?

As you can see, this is not at all obvious. Again focusing only on the last three cycles, there doesn’t seem to be any clear pattern.

Some high inflow days show positive returns. Some are big drawdowns. But you wouldn’t say one outweighs the other. At least the edge isn’t big enough to make you want to trade it.

Now you might argue that maybe there’s a delay built into the system. It is possible that large inflows of funds will only affect the price the next day or the day after.

So just to be sure, we can look at how the inflow for 1 day, 2 days, … 6 days prior correlates with BTC returns.

Below is essentially the same chart as before, except that each area considers 0 day inflows, 1 day before, 2 days before and so on. The name of the game is to find the time shift that shows large cash inflows more correlated with negative returns.

Right now, there is nothing that stands out from this graph.

So, one more metric is crossed out from the list. Large one-day inflows of funds are not a sign of an impending end.