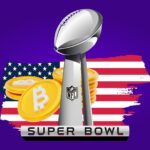 February FTX.US exchange launches Super Bowl LVI advertising campaign. As part of the advertisement, the site will give away bitcoins for free. True, the exact amount and number of tokens are not yet known.

Information about the upcoming distribution appeared on the official Twitter account of the cryptocurrency exchange. It is already known that four people will receive prizes. An important condition is to be a resident of the United States (New York was excluded from the list) and retweet the pinned post about the advertisement. It is not necessary to create an account on FTX.US before the start, but it must be in order to accrue winnings. The winners will be tweeted.

The post says that the launch will happen .02 in the second half of the Super Bowl. The game will start at 13: Eastern Time or 1:00 GMT 00.. The number of tokens will directly depend on the advertising time. For example, if the video is shown in 14: , then the exchange will distribute 8.5 BTC to the lucky ones. If the ad is shown after 23: , then the number of tokens will increase to 02 (at the moment it is about $484 thousand).

Sam Bankman-Fried, founder of the exchange , believes that a huge number of sports fans will help expand the audience of FTX.

In June 2021 of the year, the exchange partnered with Tom Brady, a seven-time Super Bowl champion. FTX also sponsored Major League Basketball. And the site launched its first advertising campaign at the Super Bowl in October.