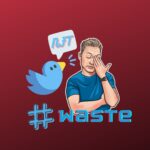 Musk “to the nines” criticized the new avatars on Twitter

Tesla founder and CEO Elon Musk is dissatisfied with the innovation of Twitter. According to the billionaire, the administration of the social network has the wrong priorities.

“This is just terribly annoying. Twitter is wasting engineering resources on this nonsense when every thread is full of crypto-scammers who throw a link to block a spam bot? ”- the businessman is indignant.

We previously already talked about the fact that the social network Twitter has a new feature. Now the avatars of authorized NFT owners from the OpenSea marketplace are highlighted with a special frame. This allows you to distinguish them from ordinary pictures.

Under Musk’s post, users suggested that he “create his own Twitter”. Others even noticed that NFTs are far from real art, and therefore they definitely should not have spent resources on their integration.

Musk’s negative reaction may be dictated by the fact that ordinary scammers often hide behind the guise of a billionaire. They lure money from users, promising a “proven” and “highly profitable” way to invest in cryptocurrency.

Over the past year, the number of such pages on the social network has really increased significantly.