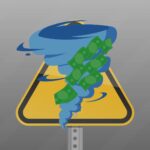 Recently, Tornado Cash has become a paradise for hackers

It allows you to launder stolen money and cover your tracks

Tornado Cash is a popular mixer that has been at the epicenter of all major hacker attacks lately. It allows criminals to cover their digital footprints on the Ethereum blockchain: mix stolen ethers and safely withdraw them to other accounts. For example, last week, using Tornado Cash, hackers laundered $ million stolen from Crypto Com.

CoinDesk journalists interviewed one of the co-founders of the company, Roman Semenov. He admitted that the team cannot influence the actions of users.

“The protocol works autonomously. It is beyond the control of the developers or any other third party.”

Semenov added that the owners of Tornado Cash only conduct tests and publish codes on GitHub. All other tasks are handled by the decentralized community (DAO). They vote on changes/deployment to the protocol and decide other issues.

By the way, friends, if you don’t know what DAO is, we have a short video on this topic:

Because this is a decentralized and autonomous protocol (like other DeFi projects), the responsibility is shared by all its members. Tornado Cash does not have a headquarters, CEO, or backend team. And the user interface is managed by the Ethereum Name Service.

” The protocol is designed in such a way that it can no longer be stopped. The project would be meaningless if someone else controlled it. It’s like taking power over Bitcoin or Ethereum “ – summed up Semenov.