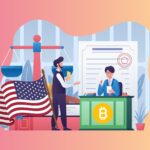 On Wednesday, 01 January, on the blog of the non-profit organization Coin Center published an article about the new “America Competes” bill in the US. According to analysts of the association, this act will have “catastrophic” consequences for the cryptocurrency sphere.

This bill is not limited to digital assets. “America Competes” is an all-encompassing law that will affect many economic areas, including investment.

He came to the attention of Coin Center thanks to one point. We are talking about an unprecedented expansion of the powers of the Ministry of Finance (page 1482). If the “America Competes” act of 1482 is passed, the agency will be able to unilaterally prohibit any cryptocurrency transactions.

In fact, the structure will receive the “right of veto”. The Ministry of Finance will be able to prohibit any financial institution from providing customers with access to cryptocurrency networks.

Of course, the law does not directly deal with digital assets. Not at all. There is only an indication that the head of the department has the right to prohibit those transactions that the ministry considers “suspicious” or “posing a threat” to the US economy.

The reason for this was the sharp increase in the number of hacker attacks on American enterprises. At the same time, in most cases, attackers demand a ransom in cryptocurrency.

It is important to understand that US Treasury Secretary Janet Yellen advocates limiting the cryptocurrency space. This means that she will use this right with a high degree of probability.

The head of the Coin Center, Jerry Brito, urged Americans to contact local deputies with a request to highlight this issue. The addition to the law is not advertised, and public outcry may affect whether it is accepted or not.

Earlier, we talked about Bank of America’s forecast for digital currencies. Analysts of the company are sure that by the 2030 year the US will release its own CBDC.