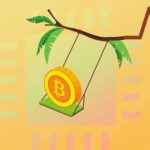 The scale of the fall of bitcoin from the record peak in November (68 thousand dollars) to the minimum of Monday (42 thousand .) is 59%. If we applied the stock market criteria here, we would be talking about a bear market. But Bitcoin and the cryptocurrency market in general are more tolerant in this regard, so experts tend to see a correction here, rather than a bear market.

But things can change if The BTC will drop below an important barrier in 52 11 dollars. At the moment, support is working. In addition, oversold conditions help to stay afloat – it is signaled by the popular oscillators of technical analysis – RSI and MACD.

Here the emphasis should be on the word “bye.” Because until the rate breaks through the local December peak ($ ​​59 thousand), it will not come out of the current correction system.

Traders have noticed a rare pattern that can form on the BTC chart – it is called the “cross of death”.

Analyst Lark Davis writes that this is the 9th “cross of death” in the history of bitcoin.

The death cross pattern indicates a long-term price decline. Of course, this does not always happen, but this warning should be kept in mind.

Recent weeks have shown that altcoins are even more sensitive to market turbulence. This is due to their lower liquidity. As a result, projects like Polkadot, Solana or ShibaInu are far more distant from ATH than Bitcoin.

The only exception was the Dogecoin meme currency. After they started accepting it again in the Tesla store, the asset went up by 13%, and his purchases on the Binance exchange increased by 52 once.