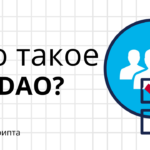 What is DAO | Encrypted | In the article you will find:

Today we’ll talk about what is DAO. After all, this is one of the key concepts on which the concept of Web3 (Video Version) is built.

What is DAO? We explain in 9 minutes! (ProstoCrypta)
Today, in the section “Just Crypto” we will talk about what DAO is.

Let’s start with what DAO is literally. It is an acronym that is made up of the words Decentralized Autonomous Organization, abbreviated as DAO. If it is very rough, then this is an organization that works according to the rules that are written in the code using smart contracts. And it all happens on the blockchain. These rules, as well as further changes and actions, are proposed and approved by members of the DAO members. And now let’s analyze it all in more detail and with examples. Do you know how big companies like Apple, Google or Netflix work? They have a board of directors that makes certain strategic decisions by voting on specific items. In fact, they set the rules for the company, set big goals, and so on. As a result, a list of necessary actions is obtained, for which the performer is responsible – the CEO of the company.

So, DAO does not have a CEO because it runs on code and smart contracts. That is, all decisions made are carried out without human intervention, automatically. This part is responsible for the word “Autonomous”. Instead of a board of directors, which is very difficult for ordinary mortals to get into, there are DAO members who have the right to put forward proposals and vote for certain decisions. This part is responsible for the word “Decentralized”. Decisions can be anything: allocating grants to developers, changing commissions, remuneration for farming, changes in smart contracts, and so on. or buy on the market after the launch of the platform. The more tokens, the more weight when making decisions.

One of the main problems that such autonomous organizations must solve is the so-called Principal-Agent Dilemma. The problem is that when an individual or entity (the “agent”) is empowered to make decisions or act on behalf of another entity or individual (the “principal”) there is a risk of divergent goals, priorities, or access to sensitive information.

A vivid example is politics. We vote for certain parties or deputies, as a result of which we essentially delegate to them the right to make the most important decisions. Prescribe laws, appoint ministers and everything else related to government. It is no secret that the interests of deputies often differ greatly from the interests of those who elected them. funds. In DAO, in order to perform any action related to the spending of funds, an open and honest vote of participants on the blockchain is necessary. And the distribution itself takes place automatically using smart contracts without human participation.

Types of control in DAO

But DAO somehow inherits some features of current systems. For example, there are 2 types of control:

You can also distinguish 2 types of DAO: