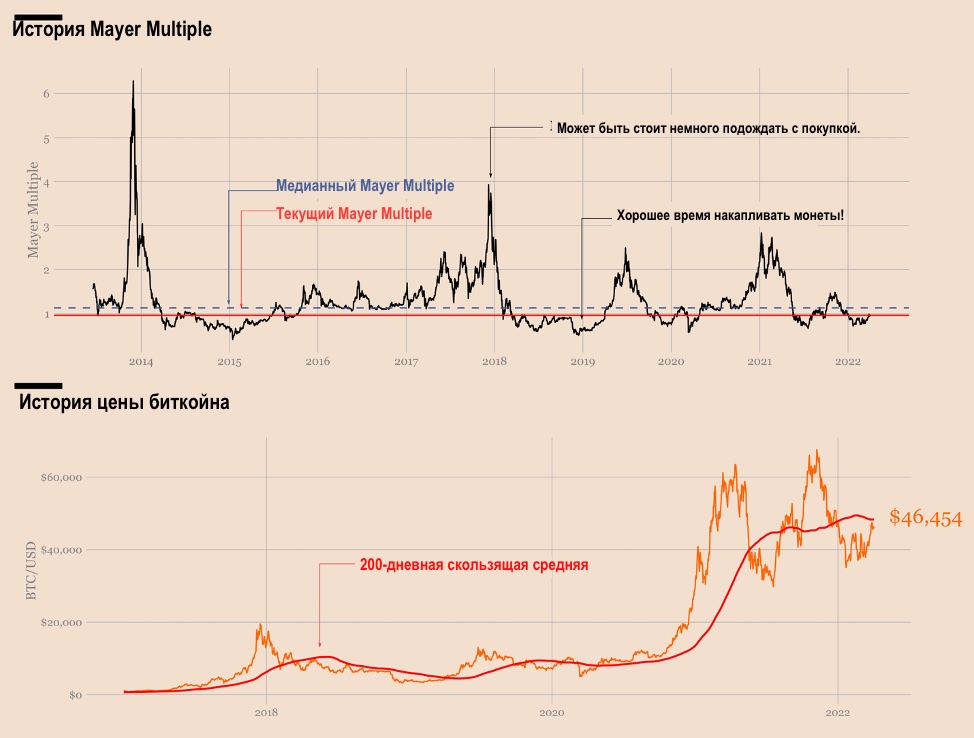 Last week I was quite skeptical about the current price movement of bitcoin. Therefore, I hold a long position until a real breakout occurs. We are still waiting for it… But at least the situation is becoming clearer.

Mayer Multiple is just below 1, but doesn’t cross that value yet. It’s frustrating, of course.

When it comes to trading, you’re either systematic or you’re not… There hasn’t been a crossover, so you just have to stay where you are.

It’s Terraform Labs, the network entity behind the Terra and Anchor protocols.

Okay, maybe when you say that, it’s not very impressive. A stablecoin business buying bitcoin as a treasury move seems pretty natural.

However, Terraform Labs is very committed to this task. In general, they want to purchase BTC worth $ billion and this is not an empty promise: they have already begun to buy, and currently control in the area ths. thousand BTC.

Not bad compared to others network entities of the same kind.

It’s always good to hear that companies perceive bitcoin as a store of capital. This is true no matter what business it is.

He is blocking a significant portion of the supply, hopefully for a long time. Since this purchasing program is a continuous process, it must put continuous pressure on buyers.

Furthermore, there is a fact that the more examples of these types of strategies, the more common their application will be. .

This is exactly what it takes to make bitcoin a full-fledged store of wealth. By full-fledged, I mean not only an asset created as a way to store capital, but also an asset used in this way in practice.

The only drawback is that Terraform Labs is a crypto-native entity . This means that the old world is unlikely to use them as a guide in terms of strategy.

But is this really a problem?

I mean, ever since Michael Saylor started buying bitcoin as a treasury asset a couple of years ago, we’ve been waiting for other public companies whose business isn’t directly related to bitcoin to do the same.

How has it worked so far?

As you can see from the chart above, there are a large number of public companies that invest in BTC. , to be precise. But how many of them do not actually intersect with the world of digital assets? Less than 5.

So it looks like Michael Saylor’s thesis didn’t attract too many old world stakeholders.

Perhaps this is one of those cases where, for a complete paradigm shift, the old stakeholders must be replaced by the new digital generation.

I I will quote you Max Planck, the winner of the Nobel Prize in Physics, on this occasion:

If you look at the details of which groups of addresses are driving this accumulation trend, it still turns out that small addresses (those that control less BTC) are the only ones to aggressively accumulate coins.

The bigger addresses haven’t accumulated coins lately, but they haven’t sold them either.

If you’re optimistic, you might think that surely this means there’s more room for growth if the whales join the movement.

If you are pessimistic, you probably think that the whales are just waiting for the right moment to pounce on unsuspecting small investors.

Personally, I don’t know what to think. If you look at the indicator of total risk, then the market is certainly not overheated. So if we can pick up momentum, no doubt BTC can go pretty far.

But all this does not change the overall picture.

Perhaps you missed this little fact, but the yield curve inverted last week…

We have discussed this in previous reviews, but the bottom line is that it is bad. The probability of a recession in the coming year is quite high.

So, unless bitcoin begins to decouple significantly from risky assets, it is worth remaining cautious.

To be fair, Bitcoin’s correlation with SP looks like it’s slowly going down. We need to keep a close eye on whether this will continue to be so.

disclaim responsibility for any investment advice that may be contained in this article All the judgments expressed express only the personal opinions of the author and the respondents. Any actions related to investments and trading in the crypto markets are associated with the risk of losing the invested funds. Based on the data provided, you make investment decisions carefully, responsibly and at your own peril and risk.