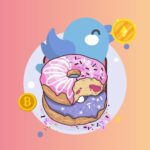 Twitter has unveiled new options for donations. Users can now add their Ethereum address to their profile. This option is available only in mobile applications of the social network.

Only adult users can receive and send donations. At the same time, Twitter refused commissions for donations (but third-party payment systems may charge it). The new feature supports ETH, the Ethereum blockchain token. Support for ENS domains has not yet been announced.

The NFT space doesn’t leave Twitter indifferent either. In January, the social network invited users to connect a crypto wallet and set NFT as a profile picture. NFT avatars are different from ordinary pictures – they have a hexagonal frame and broadcast information about tokens.

Dorsey would not Approved20140

Jack Dorsey, the former CEO of Twitter, would definitely not appreciate the integration with Ethereum. He is a well-known fan of bitcoins. Dorsey Block is in the TOP 5 largest BTC owners.

However, a couple of months ago, the businessman left Twitter to devote more time to his bitcoin projects.