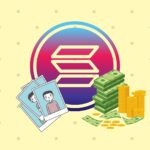 Only for today, 01 January, more than 3 tokens were sold on the project mln USD

According to the analytical portal CryptoSlam , in January, sales on the Solana platform exceeded $1 billion. The network is in huge demand amid problems with Ethereum with prohibitive fees.

Solana has grown in popularity over the past year. In August, the platform entered the top blockchain projects by market capitalization. Now it competes with Ethereum and even threatens its position in the segment.

Users are attracted by the simplicity, convenience of the platform and low transaction fees. All this makes the site a leader in the market.

At the moment, the most expensive NFT sold on Solana remains SolMonkey #1355 for $2.1 million. This is one of 10 thousand tokens of the NFT Degenerate Academy collection.

The main problem of the site is the lack of “high-profile” projects, for example, Bored Apes Yacht Club. But given the given trend and the prospects for the NFT market, it can be assumed that the achieved trading volume is far from the top of the project’s potential. In today’s date, 20 of January, more than $3 million worth of tokens were sold on the site. The maximum daily trading volume was recorded 29 August last year (39,22 million dollars), reports The Block.