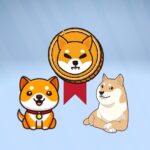 Now, against the backdrop of a decline in the crypto market, many alcoins are getting cheaper. So, the “dog currency” of the Shiba Inu lost more than 22% compared to record peaks.

This is really a lot. But not the largest number compared to other meme-coins. Recently, hundreds of them have appeared, usually they are related to “dog” topics and copy the concept of dogecoin.

In general, DOGE is the leader in the market – it has 4 million owners. He is followed by his “youngest son” BabyDoge (1,17 million holders).

Shiba Inu has ambitious plans for the future. At the beginning of the year, they announced that they were moving to a decentralized system (DAO) and transferring the right of control to users. They will also allow clients to submit their own project initiatives. The new system of work will be implemented in stages.