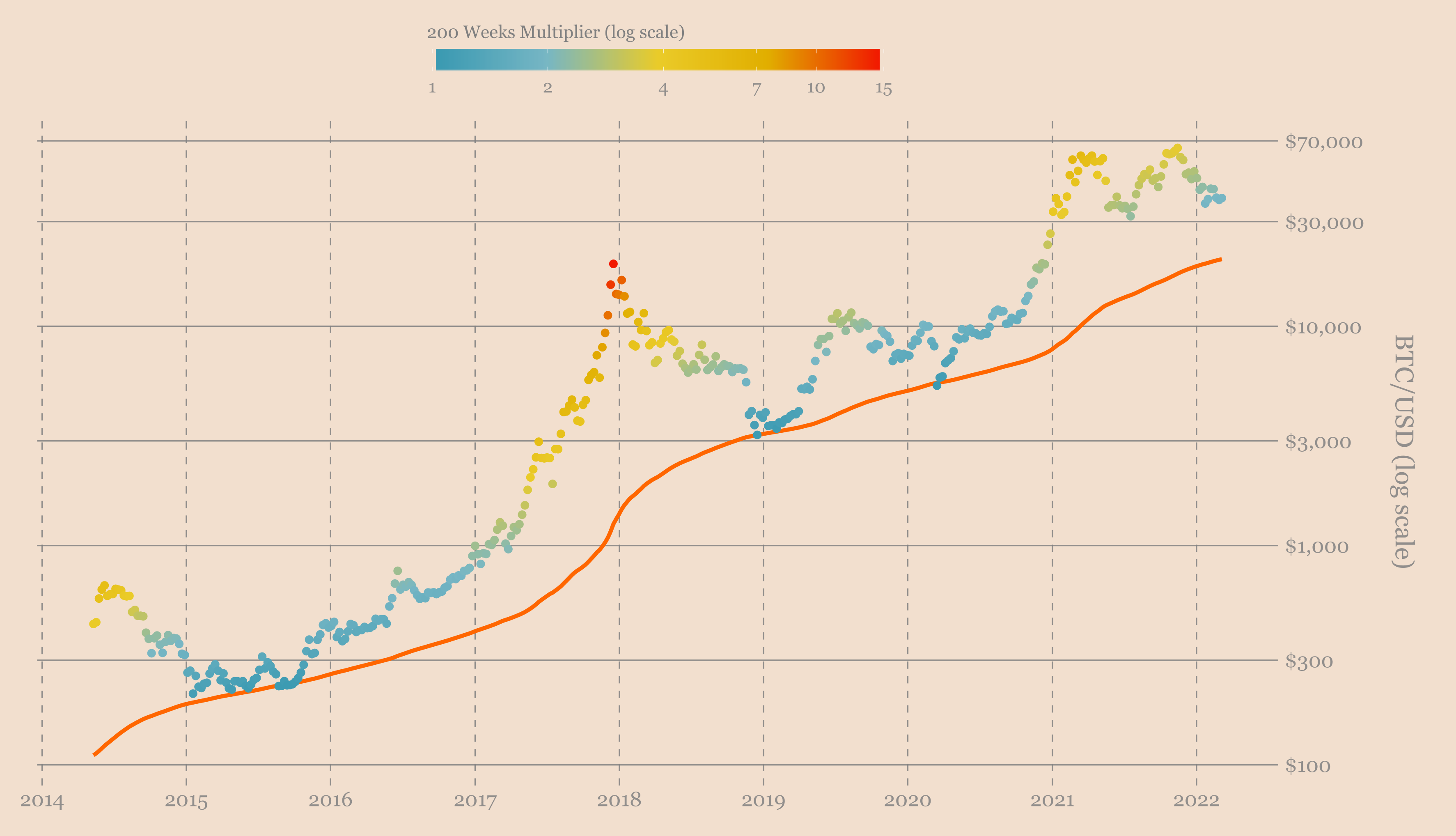 Bitcoin price is what it is. The current bear market is not like the previous ones. But the price of BTC has been in the sideways for a long time, so I would not call the current market bullish either.

Two questions remain: How profitable is it to buy bitcoin now? And does the Fed have any wiggle room to avoid making a mistake?

If you take a wider view and look at the weekly bitcoin chart, it’s not so bad. BTC remains far from 16-period moving average. Who knows, maybe since we didn’t see as much growth as in the previous cycle, we might also see fewer drawdowns.

You probably know my thesis about how events are likely to develop in the next few months.

Summarizing, you can say the Fed is in control. If they bring confusion into their monetary tightening cycle, all risk assets will fall. Bitcoin is currently traded as a risky asset, so is unlikely to be an exception.

I will briefly talk about what is happening with the Fed in the next section. To begin with, let’s just pause for a moment to consider whether buying bitcoin at the current price is a bargain.

First of all, bitcoin is cheap compared to its long-term trend. By long-term trend, I mean -day moving average. Right now, BTC is trading below this line. This usually only happens in bear markets.

And in fact the indicator for days was below its current value only in % of cases since the first halving.

Thus So, based on the long-term trend metric, bitcoin is indeed quite cheap.

But is it cheap compared to what the hodlers paid? This is what the Market Value to Realized Value (MVRV) metric measures. Currently, Bitcoin’s MVRV is 1.6x, which means that collectively, hodlers are making a profit.

This is not something you usually see in a bear market. MVRV 1.6x is pretty much in the middle.

This means that there is potentially quite a lot of room for bitcoin to go down before the weak hodler hands panic sell. If you look at how the current value of the MVRV ratio is within its historical distribution, then this is just an average value. Not overpriced, not underpriced.

So I wouldn’t say that bitcoin is cheap based on this metric. But it’s also not expensive.

At the same time, if you choose any random BTC valuation, from stock-to-flow to a simple analysis of relative market cap, bitcoin will be cheap in comparison with its potential upside.

In my understanding, this means that bitcoin is cheap and it’s time to buy. Invest all your money right now? No. Buying BTC with leverage? Hell no! Building a position that pays off when the macroeconomic landscape eventually becomes favorable? Yes.

Looking at the on-chain data, it appears that smaller hodlers have recently come to the same conclusion.

Check the accumulation trend for latest days. The transition from small investors to whales basically runs the gamut from strong accumulation to distribution.

In fact, if you look back at the longer accumulation trend, you can see different levels of strength:

This is definitely not a sign of surrender. Bitcoin is not dead. Hodlers are just getting ready for the long term.

Does this mean the price will skyrocket any time soon? I doubt. The accumulation trend is as sluggish as it gets, and the Fed is one step away from a serious mistake. Let’s discuss it.

In case you haven’t been paying attention, there’s an important meeting this week Federal Open Market Committee (FOMC) The Fed will decide what to do with rates and announce how they will continue the tightening cycle in the coming months.

And this is for the month of February. This means that the recent surge in oil prices, the surge in commodity prices and the slowly evolving situation with COVID in China threatening to (again) disrupt the global supply chain are not taken into account.

For all that there is no reason to reduce inflation in the near future. Which means the Fed has to deal with it.

Have to deal with the only tools they have control over: money printing and the Fed rate.

So what they said they would do and what they need to do is stop expanding their balance sheet (for real this time) and raise short-term rates.

But it will be difficult to do it right now. Let me show you why. All this is related to the US Treasury yield curve, or rather, its inversion.

In a typical situation, long-term yields are higher than short-term ones. Now every time we saw how with years the opposite happened, with a recession following in the US for a year or so.

The standard way to measure whether the yield curve is inverted or not is is to look at the spread between returns -year and 2-year treasury bonds. This is what you can see below. Beginning with 1946 year, after each inversion (when the 2-year period moves above -year) red was followed by a recession.

Take a look for yourself.

I wonder if that even the COVID crisis was preceded by a brief inversion. This does not mean that the bond market predicted COVID. But this means that the COVID crisis occurred at a time when the US economy was already in a precarious position.

And as you can see, the spread is in free fall again. So it is very likely that we are heading for another recession.

The difference is that this time the Fed has very little room to maneuver. Why am I talking about this? Well, there is another way to plot this chart.

Instead of using the red and blue color scheme to represent an inverted yield curve, we can color each spread point with the Fed rate value of that moment.

The darker the color, the closer the rate is to zero. Can you identify the pattern?

Well, I think there are two.

First, the yield curve inversion usually occurs at the Fed’s local rate high. That is, the Fed raises rates higher and higher until something breaks. They then correct the situation by applying loose monetary policy to solve the problem.

But the second pattern is even more interesting. This local maximum is getting lower and lower. IN years, this figure was about 8%, then 6% in 2000-s, then 4% before the Great Recession and finally around 2% pre-COVID.

So now that we’re about to see another inversion, the Fed’s rate is still pretty much at 0%. How many opportunities do they have to raise this issue before another recession hits? And will we see negative rates if QE needs to be resumed as a result?

You see the Fed has pretty much reached its limits, which means the future is very uncertain. Now is not the time to be aggressive in your investment strategy.