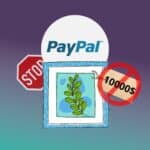 PayPal has made changes to its Seller Protection Policy against the backdrop of promotion of the NFT market. The new rules will come into force as early as 02 March.

The full list of changes is set out in the official document. The update to the Merchant Protection Policy is dictated by repeated precedents of fraud and is intended to protect users who implement NFT from a number of risks.

Now conduct a transaction with the participation of a token in the amount of more than thousand dollars is simply impossible. The reason for this is the platform’s desire to protect merchants from chargebacks and other criminal activities.

Changes in the policy of the payment system occurred shortly after the UK authorities confiscated three tokens. These assets belonged to fraudsters who are involved in a tax evasion case.

In this way, PayPal not only reduces the risks for merchants, but also protects itself. However, a number of unclear points remain in the updated policy, for example, who and how determines the nature of the subject of the transaction.

In recent months, the level of crime in the NFT market has increased significantly. Attackers not only “pump up” lots to increase their value, but also use tokens for money laundering.